Summary and outlook: Social China 2021, a bigger digital media market than ever imagined

HomeBlogdimensionSummary and outlook: Social China 2021, a bigger digital media market than ever imagined 2020 rushed by in the midst of the epidemic’s oppression. Compared to the apparent weakness of traditional media and other industries in the blockade, digital media, especially social media, can be said to have fully demonstrated its dominance and its own superiority in the lives of Chinese people today in 2020, gaining more and more advertisers’ favor – China in 2020 is still SOCIAL, and the special context of the times clearly shows a broader than imagined digital media market of the future for all media people.

In summary: China’s digital market in 2020

According tothe January 2021 China Regional Digital Report，cell phones have become an integral part of Chinese life today: 1.61 billion people are connected to cell phones out of a population of 1.44 billion, an increase of more than 5 million compared to the same period last year, and nearly 65% of Chinese people are active social media users. Not only in numbers, but the amount of time Chinese people spend online is growing: every day Chinese users spend 5 hours and 22 minutes on the Internet, accounting for more than a third of our waking hours. And social media accounts for nearly half of that time, at 2 hours and 4 minutes. 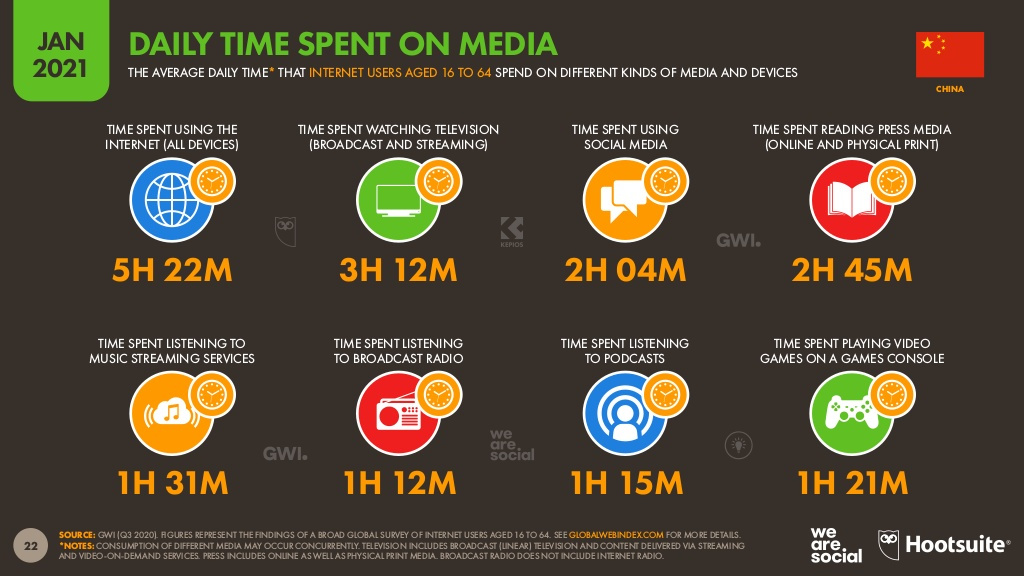 In fact, Chinese social media users are among the most active in the world. As of January 2021, each person in China has an average of 7.4 social media accounts, with 97.2% of Chinese people actively using or contributing to social media. With a large population base to support this, it is only to be expected that digital ad spending, especially on social media, will rise significantly: $250 billion will be spent on social media advertising in 2020 alone, an 11.5% increase year-over-year.

“Marketing in China today has both promising trends for booming growth and challenges in a complex environment.” ——Beiping Tan, President, Seconds Marketing Academy

As evidenced bythe January 2021 report，China’s digital media, particularly the social media market, is growing rapidly and showing unlimited potential.。Although some experts say,”Marketing in China today, has both promising trends of booming development and challenges of a complex environment.” However, advertisers, especially emerging advertisers, clearly have high expectations and confidence in China’s digital marketing market: nearly 95% of advertisers predict that overall marketing investment in China will increase in 2021, with overall positive confidence in Chinese marketing investment. At the same time, nearly 80% of Chinese advertisers clearly indicate that they will increase their advertising investments in short-form video media and social media.

Both from the summary of the previous year and advertisers’ willingness to invest in the next year, it is believed that in the future, China’s digital media market will have more guaranteed investment, as well as sufficient audience engagement. So, as a media person, while we look forward to a bright industry market, we also need to be prepared for the changes in demand and market changes caused by the influx of resources. For example: the increasing demand for cashing-in services from self-publishers; the increasing dependence of social media platforms on marketing service providers; the increasing demand for effect-based marketing services from industry clients; the desire for richer forms and types of content, and the growing importance of data and related technologies such as algorithms.

Seize the opportunity, and face the challenge!